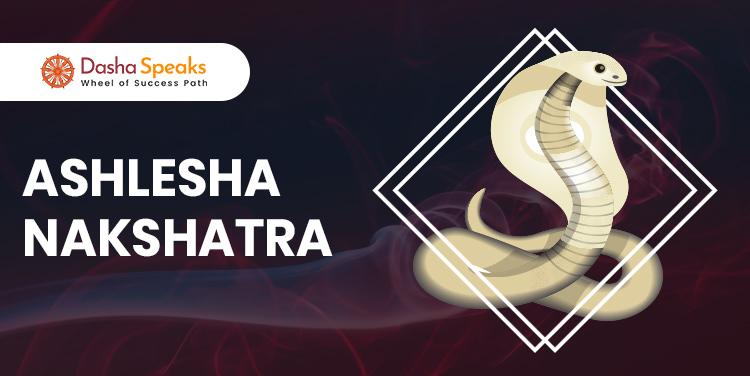 Ashlesha, which means embracing or clinging, is the 9th Nakshatra in Astrology. Ketu was born in this Nakshatra. This constellation is connected to the energy of the serpent or the Naga. In western astrology, Ashlesha is also called Hydra or Cancri. It is located in Cancer and that is why the Moon also affects the natives of Ashlesha Nakshatra.

In the symbol of Ashlesha Nakshatra, you can see a coiled serpent. This coiled serpent has a long tongue which is sharp enough to affect its surrounding. Due to this image of a serpent, Ashlesha is also known as a clinging star.

Ashlesha Nakshatra male and females have square-shaped faces and broad and thin lips. Their eyes are small, round, bright, and gleaming. Their complexion is slightly pale. Their facial features are not so attractive. Ashlesha Nakshatra natives have a suspicious look on their faces. They are very sexually appealing. Those who have Ashlesha as their constellation generally attract others with their snake-like movement. They know how to work out their charm on other people using their moves.

Ashlesha Nakshatra natives are blessed with extraordinary intuitive abilities and great observing power. These people are suspicious and deceptive who use their planning and plotting to climb the ladder of success. Their suspicious nature often makes them paranoid and hallucinating.

The natives of Ashlesha Nakshatra are adept at presenting themselves as social and friendly individuals. They use this trait to flatter other people. Once their job is done, they get back to being cold and ruthless just as they actually are. They are deceitful, ruthless and use their plotting to complete their work.

One aspect of Ashlesha Nakshatra natives is role-playing. They are like chameleons who can change their appearance and behavior according to what situation they are in. They use it to bend the situations in their own favor. But, they can’t get away easily from the eyes of people who have normal levels of perceptiveness. A perceptive person can sense their scheming nature easily and that is why Ashlesha Nakshatra natives remain always worried and cautious about their actions.

Ashlesha natives do not trust someone easily. They often ruin their most confidante bonds due to their suspicious and paranoid nature. They even hesitate to vent out their true feelings and thoughts due to their social suspicion and fear.

Their suspicious nature also sometimes works as an advantage for them as it boosts their observation and intuitive abilities. They can sense the disastrous situation immediately and make amends before it’s too late.

Ashlesha Nakshatra male and female have a clinging nature just like a snake. They cling strongly to their family and close ones. This clinging nature can be interpreted as an emotional attachment including love and comfort but in some cases, it can also be seen as restriction and bondage.

The natives of Ashlesha Nakshatra are very curious by nature. They need to know every small detail affecting their surroundings and their loved ones. They also have a good adjusting quality, they can easily mend themselves in the situation.

One strange quality of Ashlesha Nakshatra is their penance. They can easily practice meditation, religious activities, bodily mortification while others struggle to do that. They are also filled with willpower. They fight for any particular thing and keep applying efforts until they conquer it.

The Ashlesha constellation is extremely auspicious for activities related to scheming and plotting. It is favorable for making plans against one’s enemies. In the Ashlesha constellation, you can also engage in activities related to filing lawsuits or administrating poisons. It is propitious for the beginning of any sexual activity. It is also auspicious for all short-term activities but you should make sure that there should be lesser risk involved. It is a very favorable period for Kundalini Yoga.

In the period of Ashlesha Nakshatra, you should not begin any auspicious activity like starting a business. It is inauspicious for doing business and new beginnings. In this period, you should restrict yourself from borrowing or lending money.

The professions that are favorable for people born in Ashlesha Nakshatra are:-

Also See: Remedies for Getting Job Quickly in Lal Kitab

Those who are suffering from affliction to Ashlesha Nakshatra should worship the God of Snakes. The worship should be done by properly following serpent rituals such as Sarpa Homaand Naga Panchami i.e. offering milk to snakes. As per Vedic astrology, you should chant the root mantra “Om Kham” and “Om Gam”. This mantra should be chanted 108 times in the lunar transition period to become free of clouds of inauspiciousness wandering over your life. It is advised to wear dark colors such as red or black. Also, Ashlesha Nakshatra natives should perform all the important actions corresponding to the position of the Ashlesha constellation for the most beneficial results.

Were you born in Ashlesha Nakshatra? Need personalized insights about Ashlesha Nakshatra and its influence on your life? Chat with an astrology expert and reveal what is written in your stars for your future. Discover detailed insights into your life and get astrological remedies for a happy and prosperous life.