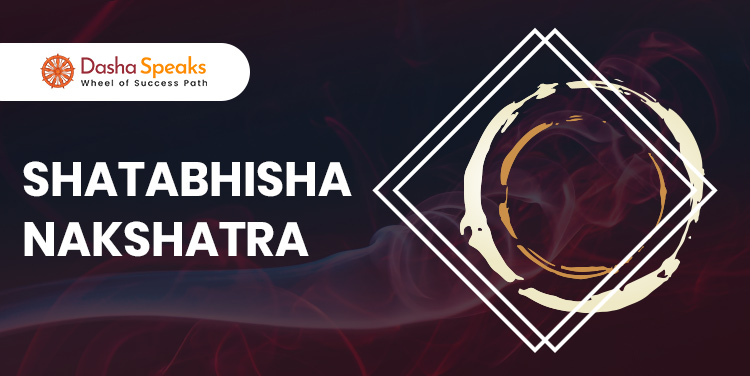 Known as “the Star of Cosmic Order”, Shatabhisha holds 24th position in the series of 27 Nakshatras. It is an outstanding constellation consisting of a faint group of stars. All these stars lie in the heart of the Aquarius constellation. In the sky, this asterism can be seen by its neighboring bright star, Alpha-Aquarii (Sadalmelik).

The Shatabhisha Nakshatra Lord, Varuna is the lord of oceans. He governs the cosmic and terrestrial waters. In the image of Nakshatra, Varuna is depicted holding a pot of Soma in one hand( the preferred drink of gods). The drink suggests the idea of rejuvenation and intoxication. On the other hand, Varuna is holding medicinal herbs which inspired the idea of hundred physicians associated with this star.

Shatabhisha is the ruling Nakshatra of the science of Numerology. Its numerical potency of 17 in Numerology is seen as a medium to bring celestial energies to the earth. It decodes the secret working of the Universe and relates to the movement of Kundalini through Chakras (seven sacral centers). Shatabhisha is the first star where the exploration of Chakras occurs on the full scale to bestow fruits and get access to the functioning of the Universe.

Shatabhisha is the star that baffles through puzzles and mysteries. It invokes its natives to discover the real truths of the Universe. Although this Nakshatra belongs to the Butcher caste, it is not cruel or fierce. It is comparatively benevolent than the other Nakshatras with the same caste.

Shatabhisha Nakshatra is the apex of Rahu’s energy. It is ruled by Saturn, Rahu and Uranus. However, the Shatabhisha Nakshatra ruling planet is Rahu. As per Vedic Astrology, Mercury, Venus and Rahu offer favorable outcomes in this Nakshatra while Saturn in Satabhisha offers positive outcomes with sorrow and despair. that strikes harmony and understanding in all the forms of existence. It befriends the Universal energies and makes everyone work together even if they are enemies. This Nakshatra is associated with learning and accumulation of Knowledge and thence Goddess Saraswati can be also said to be connected with the Shatabhisha constellation.

Children born in Satabhisha Nakshatra exhibit fairly handsome and elegant dispositions. They lack charm and beauty but have their own magnetism through which they attract people. Their outer appearance is calm, quiet and shy. They look arrogant from the outside but inside they are soft and introverted.

Shatabhisha Nakshatra is blessed with great healing powers and thus the Shatabhisha Nakshatra males and females heal fast from their wounds and hurts. They exhibit outgoing energy and have an uninhibited character. They are self-dependent, hardworking, methodical, disciplined and action-oriented. They never wait for any assistance and have clear-cut rules of what is right and what is wrong. These natives stand strong on their decision and are very capable and intelligent to perform any task. Their emotional energy is high and thus they get very emotional when it comes to matters of heart.

Shatabhisha Nakshatra males and females are modest. They don’t show off and are willing to sacrifice their needs for others. The main Shatabhisha characteristic is their ability to keep secrets. They can hide their thoughts, motives, self and other’s secrets. They tend to gain access to hidden secrets and concealed things. They suspect everything and take time to get accustomed to new things, thoughts, places and people. People born in Satabhisha Nakshatra keep a guard around themselves which makes it hard for others to approach them.

The Shatabhisha Nakshatra exhibits reclusiveness, eccentricity, and aloofness. They tend to self-pity themselves and most of the time fall into serious pessimism. However, on a positive note, their seclusion allows them to contemplate and attain wisdom and enlightenment. Moreover, these natives are not social birds. They like to live alone and have a limited circle of friends.

Love and affection are in abundance in people born in Satabhisha Nakshatra. However, they at times behave harshly and rudely. They show stubbornness towards their cardinal principles and get furious when anyone hurts their morals and ethics. These natives are opinionated and no one can change their opinion easily. They are bold in speech but shy to exhibit their talents.

You can find Shatabhisha men and women very simple and brilliant. They are respected and admired among people. They are known to have a good memory and uncompromising ability to perform any work. These natives are sympathetic towards their surroundings and share unconditional love and affection. Despite all this, Shatabhisha people are misunderstood a lot by others due to their adamant looks.

In marital life, Shatabhisha males and females need more time to build a happy and good married life. Elders love them and they are respected by their own gender. These natives stay calm and quiet until they are provoked. Absentmindedness is one of the marked features of Shatabhisha Nakshatra men and women. The negative characteristics of Shatabhisha Nakshatra are laziness, addictions, misrepresentation and vulnerability to all sorts of mental, emotional and psychological disorders. The positive characteristics of these natives are enterprising nature, moderation, discrimination, philosophical attitude, truth-seeking nature and unbounded vision.

The professions that are favorable for Shatabhisha Nakshatra born people are:

Shatabhisha Nakshatra is not auspicious for marriage or beginning any new work. It is not good for childbirth and fertility treatments. One should not buy clothes or jewelry or do any sort of domestic activities when Shatabhisha is in the sky. Socializing, lawsuits arguments and negative or wrathful actions result in negative outcomes during this period.