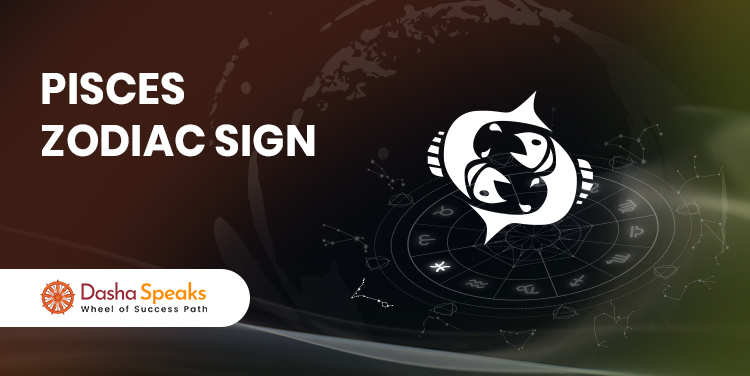 Pisces, the last sign of Astrology is the sign of Imagination, Karma and Arts. The word Pisces is a Latin word which means Fishes. It was inspired by Greek figure Ichthyocentaurs, the supporter of Aphrodite. Each sun sign in the zodiac is connected with an element ( air, water, fire, and earth). The Fish in its symbol completely compliments Pisces’ natural element as Pisces is associated with Water. It represents the ultra sensitive, emotional and psychic side of this zodiac sign.

Pisces are quick-witted, creative and extremely intuitive. They have great psychic abilities as they have a strong gut feeling. Pisces zodiac personality can feel things very deeply and they use this superpower to judge people or situations. Moreover, in addition to being intuitive Pisces is also logical and intelligent which describes it’s one of a kind personality.

Pisces zodiac sign is assigned with mutable polarity. A polarity or modality is a zodiac sign’s symbol of expression, it can be cardinal, fixed or mutable. The mutable polarity shows that Pisces can merge in its surrounding effortlessly. Neptune as the ruling planet of Pisces is governor of creativity and imagination. It shows a mysterious, dreamy and creative side of Pisces’ zodiac personality.

Also See: All The Zodiac Signs In Order

Just like the word “Pisces” interprets, the Pisces sign symbol is guided by a Fish. The Symbol of Pisces or Pisces’ Glyph depicts two fishes which are swimming in opposite directions but adjoined by a cord. This cord helps them to stay together. The Pisces Symbol signifies hidden motives and psychic abilities of this zodiac sign. Pisces zodiac sign is the most fantasy fueled and mysterious sign in the zodiac.

The ruling planet of the Pisces sign is Neptune. Neptune is represented by a trident pointing upwards and resting on a cross. This trident is made up of a receptive crescent, the cross depicts matter. It symbolizes the urge of the soul to free itself from shackles of materialistic existence and earthly agendas.

The water sign ie. The Pisces is the twelfth sign of zodiac. The last sign is assigned to those individuals who are born with Pisces birthday. Pisces horoscope dates fall between February 19 to March 20. The Pisces birth month is from February to March.

Also See: What Is The Zodiac Sign For February Month

Pisces zodiac personalities are known for being imaginative, intuitive and generous but there is a lot more to them than meets the eye. They are the most compassionate and thoughtful individuals in astrology who remain lost in their own fantasy land.

Being the water sign they are expected to display strong feelings and wavering personality but surprisingly they are very easy going. A Piscean nature is acknowledged and admired. Being the last sign of the zodiac, Pisces personality is very close to a psychic. They can read between the lines and can judge the status of a situation effortlessly. They are well aware of the power of the brain and respect all things around it including deep thinking.

Individuals born with Pisces personality carry multiple personalities within themselves. Their inner personality and outer personality which they showcase to the world contradict with one another. They need loads of self time to recalibrate these two halves.

One aspect of their personality is creativity. Pisces have a very active imagination and creativity and they use these traits to understand their emotions which is something very unique. They love investing their time in reading, creating music or paintings rather than partying with others. Also, they prefer small groups of friends for opening up and exploring their full potential.

Though the above traits may indicate that Pisces are just introverts, they are incredibly strong as well. Their gut feeling is their ultimate guide when it comes to differentiating between right and wrong. In contrast, they are the most non judgemental ones when it comes to people. They are the most kind and compassionate people you will ever meet. It is a blessing to have a Pisces in your life.

Pisces- Strengths They Are Born With

Pisces zodiac personality is creative, sensitive and artistic but the biggest strength they are born with is their great intuition power and unmatched gut feeling. Their extraordinary intuition helps them to read between the lines and make intellectual leaps. The other strength they are born with is their imagination. Pisces can be deeply imaginative as they are deep thinkers. By using this trait they can add their amazing touch in everything they do. Sometimes, the results come so unbelievably amazing, that they themselves left surprised. They have a unique work style as they spend bulk of time imagining things to boost their creativity. But that doesn’t mean that they take the whole time of the world to get things done, they are quick as well. Those who have Pisces sun sign in their horoscope know that creativity is the base of mindblowing innovations.

Pisces’ zodiac personality is extremely imaginative. This trait is a strength but also a challenge as they spend too much time overthinking problems and get pissed off when they do not find any solution. The other challenge they face is emotional vulnerability. Pisces remain always available for anyone who needs their help but when it comes to asking for help, they resist as they think that no one will understand what they are going through. Learning to open up about their emotional state is a big challenge for Pisces zodiac personality. Other zodiac signs struggle to understand the mind of Pisces and that is why they label Pisces as complicated. This triggers Pisces’ defensive personality, they get frustrated and wall themselves off.

Pisces’ secret weapon is probably the most unique amongst all other zodiac signs. They are blessed with the weapon of beautifying everyday things. Pisces knows how to add their personalized magic in day to day things for making it lovely even if they are depressing. Getting in touch with glimpses of beauty and being able to share them with their close ones is what gives Pisces peace of mind. In short, if you have an individual with Pisces birth month in your life, you will never get short of creativity and beauty.

Also See: What Are The Zodiac Signs For Each Month

Some positive traits of people who are born in Pisces Sun Sign are:-

Some negative traits of people who are born in Pisces Sun Sign are:-

So, here is a short and crisp insight for individuals who are born in Pisces birth month. You can get a pretty good idea of your positive and negative traits by your zodiac sign but it is not all. A zodiac sign can only give you a glimpse of your personality. For getting a complete analysis of your personality and potential opportunities, you should visit Dashaspeaks. Astro-Pyschics at Dashaspeaks gives an insightful analysis about your potential challenges, needed goals, past setbacks and future possibilities by reading your personalized birth chart. Talk to an Astrologer now!